By late 1983, Steve had given up his job in the pharmaceutical industry to work full time on setting up Elfin systems (Electronics for Independence).

Elfin products were still at a fairly crude stage but developing fast and an electronics wizard came on board – Nick Dobson, who was able to bring in significant refinements as well as to develop new ideas.

By 1984, the Elfin Keyboard Emulator had arrived – this allowed a BBC computer keyboard to be emulated in its entirety through a switch interface. In this way, the user had full control over the BBC Micro and every piece of software on it. This was a significant breakthrough and the emulator became a very successful product.

A smaller, more portable model – the Elfin Portable Communicator – was soon developed and this was the first device which could provide both communication and control from a person’s wheelchair.

My Voice was developed from an idea about storing speech that could be easily retrieved. By digitising samples of sound and speech – stock phrases and words – and storing them in the computer’s memory, they could then be accessed, via a touch-sensitive keyboard or a switch interface, by users (with dysarthria or no speech) to communicate quickly and clearly. The application of the technology was again ground-breaking and, although the standalone electronic device was expensive to produce, they sold relatively well to schools, individuals and communication-aids centres.

WHEELCHAIR SWITCH AND THE STAR CONTROLLER

Up until this time, wheelchair users who could not operate a joystick were unable to drive their own chairs. Steve developed a switch which would allow them to do this and increase their independence; using the scanning technique, they could select the direction in which they wished to travel. But he went further – realising there was a need for a unit that controlled more than just a chair, or a computer or a communication aid or electrical appliances (environmental control) but a combination of all of these within one device. An infra-red link also meant that the user could operate the unit remotely without having to be plugged in.

Further developments to the Elfin Portable Communicator and the introduction of the Star Controller made this possible for the first time and opened up the world for severely disabled users, who until that point were totally reliant on others for all aspects of their life.

Mike Gomm joined Elfin, which in 1986, had been incorporated ... 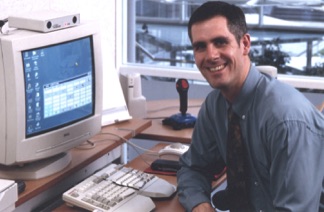